Join us for a special evening in celebration of University High’s 50th anniversary featuring a special screening of Skid Row Marathon. The documentary follows the journey of an unlikely running club started by Judge Craig Mitchell, one of University High’s original students in the class of 1974. Inspiring and moving, the film addresses many powerful themes including hope, friendship, and the power of second chances. Following the screening, Judge Mitchell will share his experiences and answer questions from the audience. Proceeds from the event will benefit Irvine Public Schools Foundation’s mental health initiative.

“It’s a beautiful, inspiring documentary with lessons on how we can all be better humans.”
—Film Festival Today

“Highly motivational… Illustrates how rehabilitation can be fostered in the most unlikely ways.”
—Hollywood Reporter 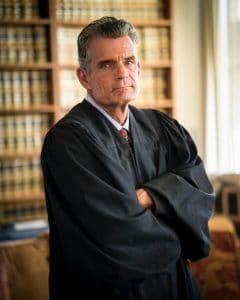 As a person dedicated to public service, both on the job and off duty, IPSF recognized Judge Craig Mitchell with the Spirit of Excellence in Service Award in 2013. Craig Mitchell was a member of the first graduating class of University High School in 1974, where he was active in student government, serving as Uni’s ASB President as well as the first student representative to IUSD’s School Board. He earned his undergraduate degree from the University of California, Los Angeles while working 35 hours per week to put himself through school. After graduation, he went on to teach high school for 16 years, primarily in South and East Los Angeles. As a teacher, he led annual excursions to Washington, DC to inspire students to pursue careers in public service, many of whom he remains in contact with today. While teaching full-time, Mitchell pursued a law degree at night and obtained his Juris Doctorate from Southwestern Law School in 1991. Mitchell joined the Los Angeles District Attorney’s office as a prosecutor and served there 9 years before being appointed a judge in the Superior Court of the County of Los Angeles. For more than 20 years, he has coached mock trial through the Constitutional Rights Foundation, and many of his former students now appear before him as attorneys. After being introduced to the Midnight Mission by a parolee who benefitted from their work, Mitchell, an avid runner, created a running club for residents of the mission. Mitchell trains with the residents three times per week, seeing the commitment and perseverance necessary to run marathons as tools that will prove useful in their lives. Mitchell collects donated shoes for the runners, and often pays the race entry fees personally to give all club members an opportunity to participate and reach the finish line.

Tickets are available pre-sale only, tickets will not be available at the door. All guests must be 21+.